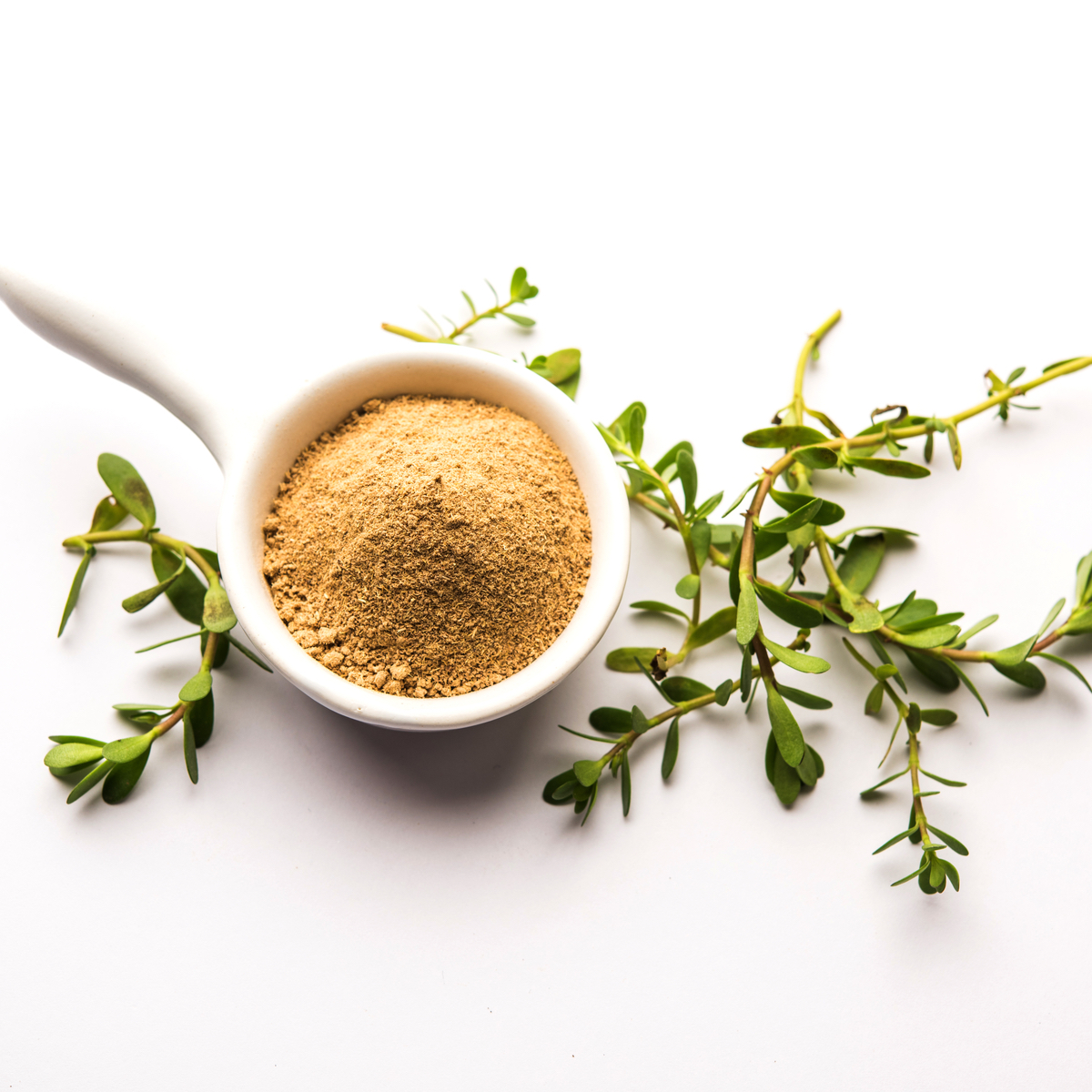 Bacopa monnieri — also known as brahmi — is used in Ayurvedic medicine, and the bacopa plant supports wellness in countless ways. Bacopa benefits brain health and cognitive function, and it can help ease stress and anxiety. Also, a bacopa supplement can help reduce chronic inflammation. And there are advantages to using brahmi hair oil or a brahmi powder for hair as a topical treatment.

Modern research backs up these traditions and proves the bacopa plant has notable health benefits. For example, brahmi powder can help suppress inflammation, and bacopa extract can lower high blood pressure. And studies show that bacopa benefits brain function and has a neuroprotective effect; it improves cognitive processing and cognitive performance.

There are also notable brahmi benefits for hair. You can apply brahmi powder and brahmi oil topically to improve hair health.

What is bacopa all about? Is it worth adding a bacopa supplement to your wellness regimen? Let’s take a look.

The bacopa plant is a perennial herb, and its botanical name is Bacopa monnieri or Bacopa monniera. It’s also known as brahmi, herb of grace, thyme-leaved gratiola and water hyssop.

Bacopa grows in tropical and subtropical locales; it’s indigenous to India and Sri Lanka, but it also grows on the southern coasts of Australia and the U.S. This small, creeping succulent loves water. The bacopa plant thrives in ponds, wetlands and tidal lands.

Each bacopa plant produces flowers, and each flower has five petals. The flowers are usually white or whitish-blue.

The bacopa leaf and the entire bacopa plant can be dried and used medicinally. In addition, you can eat aerial parts of the plant fresh.

Bacopa is an antioxidant that can help reduce free radical production in the body. In so doing, bacopa benefits health by helping to reduce oxidative stress.

In Ayurvedic tradition, bacopa is a cooling bitter. It’s believed to pacify all Ayurvedic doshas or constitutions: pitta, vatta and kapha. Furthermore, Ayurvedic practitioners view bacopa as a medhya rasayana — a plant with the capability to sharpen the mind and the intellect.

Ancient scholars appeared to know about the ways in which bacopa benefits cognitive function and supports brain cells. They reportedly used Bacopa monnieri as a nootropic, tapping this potent Ayurvedic herb to help them memorize lengthy scriptures and hymns.

So, what is Bacopa monnieri supplementation good for when it comes to overall health support?

Here are some key bacopa benefits:

But when inflammation is chronic, it can pose a serious threat to your health. Chronic inflammation has been linked with conditions such as cancer, diabetes and heart disease.

Research indicates that bacopa benefits your health by helping to relieve chronic inflammation.

A 2017 study looked at the effect that bacopa has on the release of cytokines on microglial cells. Microglial cells are the immune cells of the brain that are involved in inflammation. The study examined the effects of various bacopa extracts, inducing bacopa tea and bacopa infusion.

The results showed that bacopa inhibits the release of inflammatory cytokines from microglial cells. Furthermore, it also inhibits the production of enzymes that are linked with brain inflammation. As such, Bacopa monnieri is a useful tool for limiting inflammation in the central nervous system.

Your brain needs the proper support to function at its best. Certain herbs foster brain health, and this can improve cognitive performance.

Research indicates that the bacopa plant is one such herb. Studies show that bacopa benefits mental function and cognitive processing.

A 2011 study involving rats looked at the effect of standardized Bacopa monnieri extract on the amygdala, a part of the brain that governs learning and memory. The rodents treated with Bacopa monnieri extract showed improvements in learning performance and memory retention. Also, bacopa supplementation stimulated neuronal growth in the amygdala in ways that support cognitive performance.

Similar benefits have been observed in studies on humans.

A 2001 human study looked at the effects of bacopa extract in healthy humans. Participants who took bacopa supplements showed significant improvements in learning rate and memory consolidation. There was also a notable increase in the speed at which they processed visual information. Overall, the findings indicate that Bacopa monnieri can upgrade the way our bodies handle cognitive processes.

What is bacopa capable of doing for cognitive decline in older adults? And what cognitive effects does a bacopa supplement have on this demographic?

A 2012 study looked at the effect bacopa supplementation has on healthy older adults. Sixty participants received either a standardized Bacopa monnieri extract (300 or 600 mg daily) or a placebo over a 12-week period. The study showed that bacopa improved cognitive processing, attention and working memory in participants who received it.

Attention-deficit hyperactivity disorder (ADHD) is said to be the most common neurobehavioral condition of childhood.

Technically, it’s not a disease. Instead, it’s a group of symptoms that can cause psychological and emotional problems, as well as learning difficulties. ADHD can cause hyperactivity and impulsive behavior. It can also make it difficult for people to remain focused and attentive.

A study conducted between 2008 and 2010 looked at bacopa’s health benefit in managing ADHD symptoms. The participants were 31 children ranging in age from six to 12. The children received standardized Bacopa monnieri extract at a dose of 225 mg per day over a period of six months.

The study showed that bacopa reduced ADHD symptoms in 85 percent of the children. Those who received the standardized extract showed improvements in learning problems, impulsivity and psychological problems. And the bacopa extract was well-tolerated by the children who took it.

In today’s world, many people suffer from anxiety. This condition can inhibit our productivity and compromise our happiness and mental health.

Research shows that bacopa benefits health by preventing anxiety. Like ashwagandha and rhodiola, bacopa is an adaptogen. Adaptogens work powerfully to help your body resist anxiety and stress.

A 1998 study looked at bacopa’s impact on anxiety. It showed that Bacopa monnieri produced results comparable to those of lorazepam, a drug commonly used to treat anxiety symptoms.

Keep in mind, though, that the amount of research done on bacopa’s relationship to anxiety is still somewhat limited.

Studies show that bacopa benefits wellness by helping to keep your blood pressure within a healthy range.

In a 2011 study involving rats, intravenous bacopa was used to manage arterial blood pressure. The data showed that Bacopa monnieri had the effect of reducing blood pressure to healthy levels.

Bacopa is commonly used as a dietary supplement, but it’s also used topically. When it’s used in this way, it’s often referred to as brahmi.

According to Ayurvedic tradition, topical use of brahmi can improve the health of your hair. This involves applying brahmi powder or brahmi oil to your hair and scalp.

Cancer is a chronic disease that’s a leading cause of death in the U.S.

Both test-tube and animal studies show that bacopa benefits health by helping to prevent cancer. In a 2013 study involving mice, bacopa extract helped inhibit the growth of cancer tumors.

With Bacopa monnieri, side effects are few. This herb has been used for thousands of years in some cultures, and it’s typically well-tolerated.

However, in a few cases, it has caused symptoms such as nausea, stomach cramps and diarrhea.

Also, there hasn’t been a lot of research done on its effect on pregnant women. As a result, it’s not recommended for use during pregnancy.

Bacopa may interact with certain medications. If you’re taking prescribed drugs, consult your physician before adding Bacopa monnieri to your regimen.

You can add bacopa powder to hot water to make tea. Or you can mix this powder in with your favorite smoothie.

If using brahmi as a topical hair treatment, massage a few drops of brahmi oil into your scalp.

You can also use brahmi powder in a hair mask. Create the mask by mixing brahmi powder with an ingredient such as avocado. Leave the mask on your hair for 20 to 30 minutes, then rinse.

Is bacopa the nootropic that can help you ease anxiety and improve cognitive ability? Find out what Bacopa monnieri can do for you by giving it a try. Bacopa supplements are sold online. And if you’re curious about what this herb can do for your hair, experiment with brahmi hair oil or a mask made with brahmi powder.

Supplements such as bacopa have lots of potential benefit, but eating nourishing foods is the most important thing you can do for your health. Upgrade your diet by subscribing to Fresh N Lean. Our meal plans range from vegan to paleo, and we deliver to your home or office.