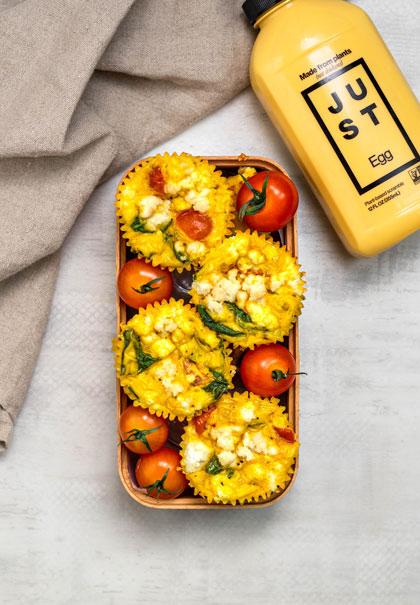 Vegan and Keto Egg and Cheese Muffins…Yes, I Did JUST Say That.

When I was on the keto diet, I relied pretty heavily on eggs. Nutritionists call them the “perfect protein” scientifically, and I do love them. But if you’re vegan trying to do the keto diet, eggs are obviously a no-go. Luckily, companies like JUST Egg are coming out with superior vegan alternatives to our favorite foods. If you’ve never heard of JUST Egg, it’s a vegan, liquid egg replacement whose main ingredient is mung bean protein. It’s practically the same color as whisked eggs, and cooks up eerily like them. The company has also started selling vegan mayonnaise as well.

I decided to put these vegan eggs to the test by using them to experiment with my favorite baked egg muffin recipe. For this adaptation, I used JUST Egg as the base and added just a few spices like turmeric to enhance the yellow color, and a dash of cayenne for some spice, along with salt and pepper. For filling the muffins, I decided to go with spinach, tomato, and vegan ricotta – a beautiful and colorful trifecta of goodness.

If you didn’t know vegan ricotta existed and is sold at the grocery store, I’m about to change your life. There’s a brand called Kite Hill and they make the best vegan ricotta, which uses almonds for the base. This stuff is so addicting, I sometimes eat it straight up with a spoon or shovel it directly into my mouth with a cracker…and I’m not ashamed. It’s also versatile in flavor and good on nearly anything.

The luscious ricotta is the perfect thing to take these muffins to the next level. The result is a filling breakfast with 9 grams of protein per muffin, and a solid meal that is both vegan and keto. The texture of the muffins is just like the real deal, too. Who said vegans had to miss out on breakfast?