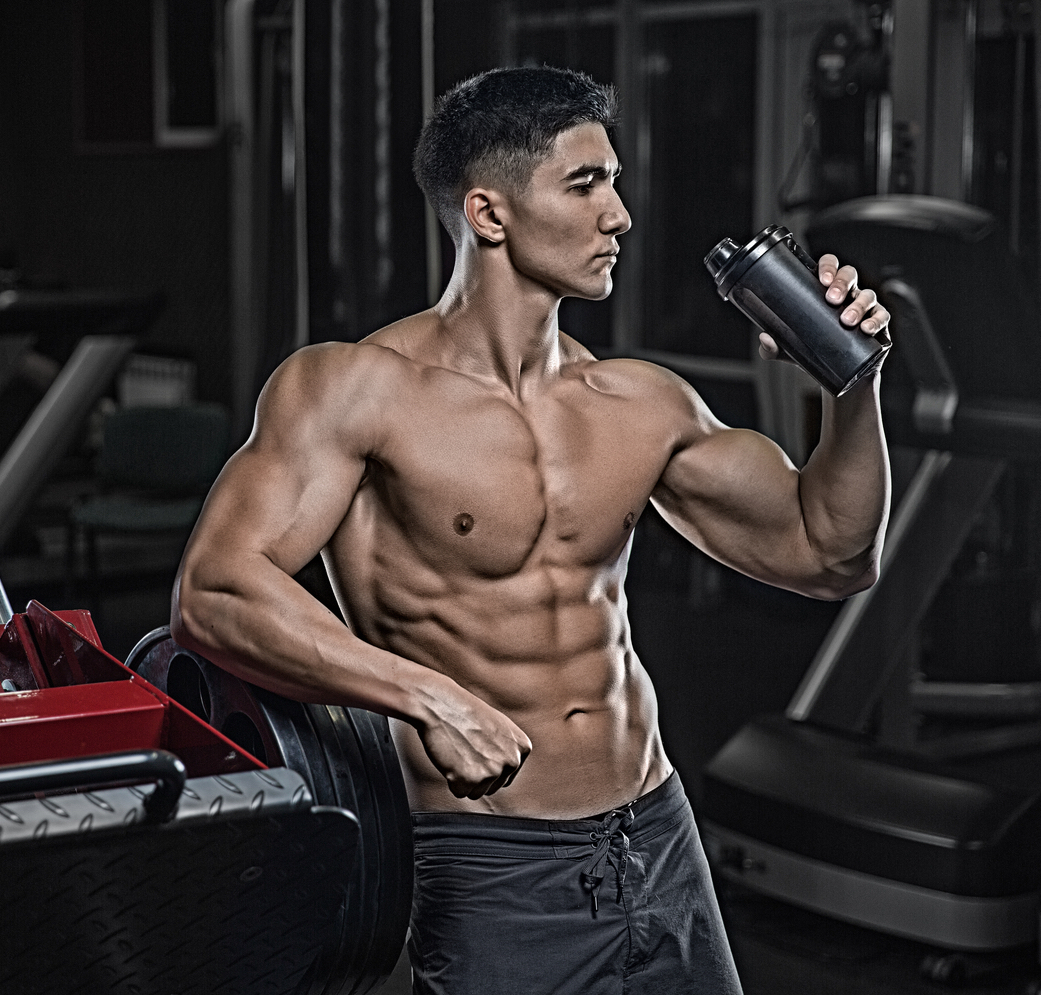 What does creatine do for your health? This popular supplement is best known for its ability to give you bigger, stronger muscles. It also has neuroprotective qualities, and it supports healthy blood sugar levels and strong bones.

You probably know creatine as a supplement that can help you build muscle.

It’s a favorite with bodybuilders for good reason.

However, this peptide does much more than just add muscle mass. It can protect your brain and improve your blood sugar levels. It may even improve bone density.

That means creatine supplementation may offer more benefits than you might think.

Creatine is a peptide that’s naturally found in the body. It’s produced in the muscle tissue, and it gives these cells the energy they need to function. Creatine plays a key role in the formation of adenosine triphosphate (ATP), a substance that fuels cellular energy. That means that if you’re engaging in strength training or high-intensity exercise, your body’s muscle mass relies on creatine for the power it needs to get the job done.

You’re probably familiar with amino acids. Each amino acid helps your body create protein. These acids play a key role in building muscle, and they have countless other functions that support health and wellness.

There are two types of creatine that exist in the body: the free form and a phosphorylated form known as creatine phosphate or phosphocreatine.

Is creatine the same as anabolic steroids?

Some people confuse creatine with anabolic steroids. Creatine has no link to steroids. Unlike steroids, creatine is a natural substance that can be legally used to improve your health, strength and athletic performance.

Though it seems utterly modern, creatine isn’t new. It was first discovered back in 1832. However, it didn’t achieve mainstream popularity until the 1990s. It hit its stride when it became known that it had been used by a host of athletes at the 1992 Olympic Games in Barcelona for its performance-enhancing benefits.

Today, creatine is one of the best-selling sports supplements on the market. According to the National Institutes of Health (NIH),annual sales of this natural dietary supplement exceed $400 million.

So, who uses creatine? According to a National Collegiate Athlete Association (NCAA) survey, 14 percent of athletes polled said they’d used a creatine supplement in the 12 months prior; there tended to be more males in this group than females.

Creatine is also popular in the military. It’s estimated that 27 percent of those in the armed forces use this supplement.

Creatine is found in the diet via meat and fish; it’s also present in cow’s milk and cheese. The typical carnivore consumes about 1 to 2 grams of creatine per day. This is stored in the body so that muscles can use this supply when necessary.

NIH estimates that a 155-pound man consuming a typical carnivorous diet would have a stored creatine pool of between 120 and 140 grams, depending on muscle bulk.

Although the only natural sources of creatine are meat, fish and milk, that doesn’t mean vegan sources of this peptide are unavailable. Vegan creatine supplements are offered. These are produced synthetically in a lab.

By a wide margin, creatine monohydrate is the most popular type of creatine on the market. It’s also the most widely studied, so if you’re looking to reap the benefits of this supplement, know that the majority of the research was done using this variant.

Creatine monohydrate is sold as a powder, and it typically consists of a creatine molecule and a water molecule.  In addition to boosting strength, this type of creatine powder is known to increase the amount of water held in your muscle cells. This can ultimately have positive implications for muscle growth.

There are other types of creatine to consider:

What does creatine do for your health?

Creatine helps with protein synthesis, and this can ultimately help you enhance muscle growth.

These benefits have perhaps been most famously realized by athletes and avid gym-goers. However, even older people with sedentary lifestyles can reap the muscle-building benefits of creatine. In one 2003 study, creatine was shown to increase lean muscle mass in older adults.

Whether you’re an athlete, a weightlifter or a gym-lover who does lots of high-intensity exercise, creatine has the effect of boosting your muscular strength and your exercise performance.

These benefits stem from creatine’s ability to help your body produce more ATP.

Research shows that creatine can play a powerful role in enhancing the way you perform during exercise. This benefit is especially evident during periods of short, intense physical activity.

3. May improve brain health and cognition

Creatine is great for physical enhancement, but it can support you mentally, as well.

Much of your body’s creatine is stored in muscle tissue. However, as we’ve mentioned, there’s also some creatine stored in organs such as the brain.

Research shows that creatine may be helpful for those with:

Cognition can sometimes diminish as we grow older. Notably, creatine supplementation has also been shown to improve cognition in older adults.

In one study involving older participants, those who took creatine showed improved performance in long-term memory tasks, as well as forward and backward number and spatial recall.

Creatine levels can drop as we age, which is why older adults may experience cognitive benefits from supplementation.

However, a 2008 study shows that in younger adults with healthy creatine levels, extra creatine supplementation doesn’t net an improvement in cognitive function.

High blood sugar can cause a number of health problems, with diabetes being perhaps the most notable.

Fatigue and tiredness are common in today’s busy, hectic world. Creatine helps boost energy, so it makes sense that it would assist with relieving tiredness and fatigue.

In one study that tracked people with sleep deprivation, creatine supplementation diminished fatigue and raised energy levels. The research also showed that creatine supplements had a positive effect on the mood state of sleep-deprived individuals.

Depressive disorders are often linked with changes in brain energy metabolism and cellular resiliency. Creatine has been shown to ease energy exhaustion and neuronal death.

In so doing, creatine supplementation may be useful in relieving depression. In a 2010 study involving rats, creatine had a positive effect on depressive behavior.

Bone density can diminish as we age. This is especially common in women. After menopause, women can become more likely to develop frail bones that easily fracture and break.

Creatine can support your health and wellness. But first, there needs to be enough of this peptide stored in your cells.

The amount that’s stored accumulates over time. However, you can speed up this process by beginning your creatine supplementation with a loading phase.

During this loading period, you’d take large amounts of creatine, with the intention of boosting the reserves that are held in your body’s cells. Creatine loading allows you to reap this supplement’s numerous health benefits in a fairly rapid fashion.

So, how much creatine should you take during the loading phase? During this period, it’s recommended that you take 20 grams of creatine daily over the course of five to seven days. This is typically divided into four 5-gram servings taken throughout the day.

After the loading period ends, you’d switch into maintenance mode. It takes about 2-10 grams of creatine each day to maintain adequate levels of this peptide once the loading phase is complete.

If you’re taking large doses, creatine can cause weight gain of up to five pounds within just a couple of days. This occurs because of creatine’s ability to help cells retain more water. The increased fluid concentration in your cells can ramp up your body weight.

Also, the body uses the kidneys to break down creatine. Even high doses of creatine are typically fine for those with healthy kidneys. But if you have diminished kidney function, you should talk to a doctor before beginning creatine supplementation.

What does creatine do for vegans?

A diet that is entirely plant-based doesn’t naturally contain creatine. As a result, many vegetarians and vegans have low creatine stores.

Research shows that creatine supplementation often provides the biggest cognitive benefits to vegans and vegetarians. Those on a plant-based diet are more likely than meat eaters to notice tangible cognitive gains when taking this supplement.

Now that you know all about creatine’s benefits, consider making this vital peptide part of your health journey. Creatine supplements are available in health food stores, as well as online.

It’s essential to support your health journey with nourishing food. If you want to add nutrient-dense, organic fare to your diet, subscribe to Fresh N’ Lean. Our meal plans range from vegan to keto. And our delicious, chef-prepared cuisine is delivered straight to your door.